Behind The Scenes—Sitting Down With Nag Ashwin

Renowned Telugu filmmaker, Nag Ashwin, has made a profound impact on Tollywood cinema with his strikingly different and impactful film work. We, at The Post, had the unique opportunity to sit down with him and learn more about his journey, hurdles, and workmanship, as a significant presence in the competitive industry. 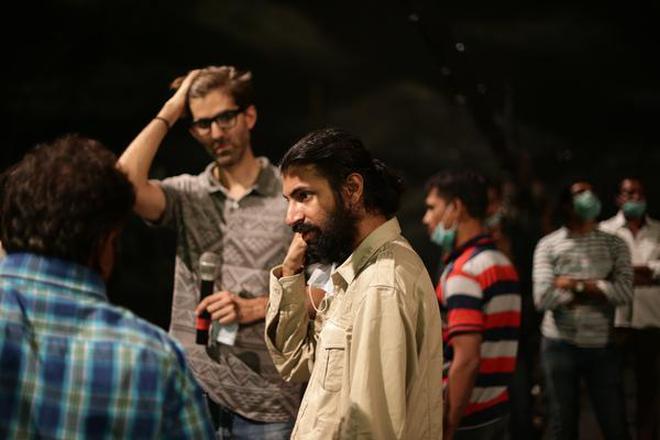 What was your inspiration behind pursuing film-making?

I think I always wanted to write. I found that it’s something that gave me excitement—to write and seek people’s reaction to what I wrote. So that is kind of where it all started. Movies were always interesting to me but I had never dared to think of them as a career option because there was no known direction to get there. There was a lot of curiosity and that’s when I thought writing would lead me to journalism. So I found my way to School of Communication, Manipal. I then realised I wanted to do more creative writing and headed into advertising. When I realised I didn’t want to sell toothpaste anymore, I found my way to films. So it took me about five years to seriously commit to building a career in films.

Did film making and story writing help you find your identity?

What I do is what I am identified by, so I guess in that way, yes. Every story you write and every project you work on, you find out something more about yourself.

What difficulties did you face on the journey of becoming a director?

It was quite a process. As soon as I was done with college, I thought I was ready to make a film. But it took me a while to figure out all the different skills that I need to hone. More than the skills, I think it’s a bit of life itself that you need to see and experience. All this happened through different jobs that I worked on; I was an assistant director and I also made my own films under a small company. I started writing and pitching to see what worked and what didn’t work. So from when I graduated to when my first film was released was about a ten-year long journey.

Were there any aspects of studying in Manipal that made a difference to the path towards your career?

Maybe, I can’t think of one thing in particular. I was born and brought up in Hyderabad and have lived there my whole life. Till I finished 12th grade, I was in the same school, and so coming to Manipal was like great exposure in terms of meeting new people and living your own life, so to speak. There was a certain amount of life experience, confidence, and responsibility that came with that. Those were definitely the foundations of my career.

You worked with Sekhar Kammula for the films Leader and Life is Beautiful, both beautifully successful movies. How was that experience? Was there anything significant you learnt while starting out that is viewed differently from a public eye?

As an assistant director, you are a part of the process from the very beginning. You know it when there is nothing but a script and you also know it when you have to search for locations, actors, costumes, and more. Slowly, you audition about 100 people, the director shortlists about ten, you work closely with those ten, and then the director finally picks one. So you see this journey and with Sekhar Kammula, it’s a long journey. He takes a long time to cast, he takes a long time to shoot. So by the time a movie is done, it’s about a year and a half or so of a ride and you see that for two hours on a screen. You realise that every decision—be it the bedsheet on the bed or the glasses worn by the actor—has a story behind it. It really made me appreciate this art form more.

Your films Yevade Subramanyam and Mahanati, both very successful, are fairly different from mainstream cinema. What was your inspiration behind making such films, given the risk that they may or may not do well?

I don’t know. There was definitely a fear in the beginning that maybe I should make something that is more acceptable or something. I figured out when I was writing it that I was trying to engineer a script and it wasn’t the right/honest way to do it. I realised that if I was going to spend a year or two of my life doing something, whether it worked or not, I should believe in it. It’s my life and my soul that I am putting in it so I just wanted to be honest about it. At the end of the day, nobody really knows what works and what doesn’t. That’s something that I learned by the success of Yevade Subramanyam especially. There were just so many probabilities of it not working.

A still from Mahanati

You made an acclaimed film, ‘Yaadon Ki Baraat’ which was selected for the ‘Cannes Short Film Corner’ (a great achievement) and you’ve also directed commercial cinema. How are the two domains different?

It is a whole different world in the film festival circuit. There are a few really good films. For example, there is this thing called the Film Market in Cannes, and Film Bazaar in India. There’s a crazy number of really good films and directors and they’re all looking for acceptance and sales. It’s a very different ballgame from the commercial cinema where you’re just selling it to a market that you know well.

I feel like neither of them would understand the other. Someone from a festival background wouldn’t understand how to market his/her film to a mainstream audience. And at the same time, a mainstream film producer would have no idea how to make money roaming around a film festival.

Did that nomination put more pressure and expectations on your shoulders to deliver? If yes, how did you deal with it?

It was a long time ago and it was not even that big a deal, actually. It was nice to get exposed to the sheer amount of good work out there. Since you’re constantly surrounded by Indian films, you tend to keep your standard at a certain level. So when you go out and look at the films outside that sphere, you realise that you actually have a lot of catching up to do.

All the actors in your movie have been greatly acclaimed for their work. How did you go about extracting the best out of these skills in front to you?

Since I spent a lot of time writing, I give most of the credit to the script, more than anything else. When it comes to the actors, they were just innately very talented. I genuinely think it was the script and their own talent that led to the extraction of skills from them. I never acted or taught them how to act!

What are your plans for the future? Will you be making more short films as well?

Right now, I’m just starting to write something. Hopefully, once I finish that, I’ll start looking for actors and producers.

In conversation with Nag Ashwin at his alma mater, School of Communication, Manipal

Lastly, do you have any words for budding filmmakers?

I think there’s a huge demand and it’s a great time to be in the film industry. There are so many avenues right now, be it Amazon Prime, Netflix or YouTube and even channels such as Zee and Hotstar. There are several platforms where content is being made at a good level of quality. I think it’s generally a good time to be in the entertainment industry. A lot of varying stories are being explored. My advice would be to be patient and spend your times learning basic skills like writing.

About the author Sriya Koduru