Human Library, a new category in Revels’19, was introduced on the 7th of March at AB 5. Commencing at 1:30 PM, the event of this category saw a massive turnout. “Our goal was to have the difficult and real conversations between the readers and the books. The viewer is invited to experience what it feels like to be a reader at The Human Library. This is the first time such a concept was introduced to the university, and looking at the turnout we see that it has influenced a lot of readers”, said Dyuti, Event Head.

An international movement that first started in Copenhagen, Denmark in 2000—‘The Human Library’ aims to address people’s prejudices by providing a platform to talk to human ‘books’. These individuals who play a book, have experienced prejudice, social exclusion and mental health problems including adversities from which they have overcome, and are now ready to share their stories with the world. The participants at the event can ‘read’ their books which means that they would have a one-on-one conversation with these people. 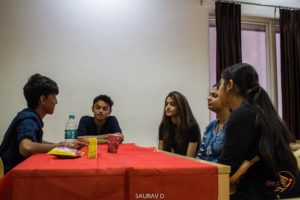 At MIT, Manipal, participants enthusiastically waited to get involved in some interesting conversations. The working team had arranged for games like Jenga and UNO to keep their participants occupied. This not only helped them pass their time but also set a different tone to the atmosphere in the room. The participants then had to fill a library card that stated their choice of books. The library cards were collected, and based on the availability of the ‘books’ the participants were asked to move into their respective rooms.

“Every time I felt that I had learned something from life or that I had evolved, I got a tattoo drawn on my body. It reminds me of what I have overcome and gives me the strength to go ahead”, said Ishaan Dhingra, a third-year student at MIT, who was one of the ten books present at the event. He spoke about his struggle with mental health issues and how he had gone astray. He realized that he needed to get back on track and told the participants how he managed to take care of himself during that low period. 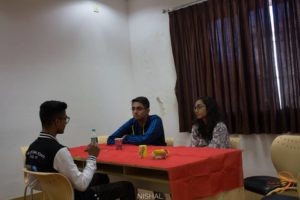 The participants looked enthused and satisfied as the left their respective rooms. They waited for their friends and shared their conversations, ranging from personal to motivational ones. No matter what the genre they all were happy with the interaction. “I was really looking forward to meeting people and talking to them. I’ve heard so many stories today. It was a beautiful experience”, said Aishwarya Balige, a first-year student at MIT after interacting with a few of the speakers at the event. Difficult questions were expected, answered and appreciated during the event. The Human Library assisted to build a positive framework for conversations that challenged stereotypes and prejudices through dialogue.

About the author Devyani Mehta

A sophomore at Manipal Institute of Technology, currently exploring the field of civil engineering. The only thing she loves as much as reading is putting her thoughts into words. That's not giving you a lot of detail, is it? So read more from her here.