With its four flagship events—Spyglass, The Apprentice, Table No.21, and Mr and Ms Revels—EQ IQ at Revels’18 did not disappoint. From interesting puzzles to questions that make you think more than twice, EQ IQ’s amazing turnout at its events was well-deserved.

As Harold Geneen aptly said, “In the business world, everyone is paid in two coins: cash and experience. Take the experience first, the cash will follow.”

Inspired by its namesake, EQ-IQ’s The Apprentice challenged its contestants on various business and managerial skills. The contest consisted of three rounds, each equally engaging and luring in participants to crowded NLH rooms. The first round, a written test, tested the participants’ business IQ, with questions ranging from economics to basic mathematics. This round proved as a screening test, condensing the crowd down to eight teams with two participants each.

The second round had the participants going back to the basics with presentations and group discussions. On receiving the topic to prepare, each contestant was given a 3-minute gap, and a 2-minute slot to speak on. They spoke on a wide variety of topics ranging from cultural conformation to franchising. The topic for the group discussion was the significantly relevant debate regarding GST. Owing to the disappointing turnout, all the four teams that showed up qualified for the final round.

The final round, however, had the teams out on the field. With Rs 100 in hand, each team was required to return with profits through fair means. Contenders strove to prove their hand at making business with interesting ideas. While some used the props provided, others struck deals with stalls set up around campus, thereby getting a commission.

In the end, the contestants received not just experience, but also the cash they earned as profits. “It was a lot of fun, and I would definitely participate again!” says Yash, a participant. The event was very well organized and delivered what was promised. It proved to be an excellent learning premise for budding business enthusiasts.

Mr and Ms Revels was not just a beauty pageant. It tickled the brain cells of the candidates with its first round involving a written examination, hence checking them for aptitude, general knowledge, and personality. The progression of the event witnessed an increase in the participation owing to the gentle rise in the desire to wear the much-awaited sashes of the titles on stage.

After the first screening round of intellect, the selected participants moved on to more interactive sessions in the Library Auditorium the next day. The first round was a rapid fire. A series of current affairs and pop culture questions were fired towards the candidates in the span of three minutes. In the heavy dose line-up of questions, a few easy ones like ‘Name 4 dishes in Snack Shack’, ‘Who’s the director of MIT?’ and ‘Pin code of Manipal’ relaxed the mood among the participants.

Next, in groups of four, the participants discussed and shared their views on topics like a change in immigration policies with time and passive euthanasia. With constructive ideas and opinions, the groups led the discussion forward. It was a site of active and healthy participation. In the last round, the candidates had an interactive session with the judges. Putting them in different situations, the judges tested the person’s wit and persona. The event ended on a good note leaving everyone in suspicion as to who will bag the title.

With an eye on giving participants the chance to step into the shoes of their favourite crime-solving detectives, EQ IQ came up with its much-appreciated event, Spy Glass, spread over two days.

Spy Glass took to the floor on the second day of Revels and opened to a jam-packed room. With participants pouring in, organizers found themselves taking multiple counts to arrange for enough question papers to satisfy the participants’ appetite. The first round was in the pen and paper format with participants given a question paper to solve in the allotted time of an hour with the people coming out on top making it to the next round.

Giving Day 3 of Revels a skip, Spy Glass ended the participants’ wait with the second and final round taking place on the fourth and last day of Revels. The final round saw participants making their way around the campus walking down trails and picking up clues in an attempt to succeed.

Spy Glass was a thoroughly enjoyable event and definitely left its participants’ appetite for solving crime satiated. While the first round saw some delays, these can be overlooked considering the flood of people which came in through the doors—more than the organizers had expected. All this highlighted the excitement the event had managed to build up and eventually lived up to.

Table No 21 by EQ IQ was a thoroughly fun-filled event. The first round of the event, held on the second day of Revels, was a written round that attracted a huge influx of participation—so much so that the round had to be conducted twice on the same day. The participants were required to answer multiple choice questions which were based on aptitude and the entertainment industry. 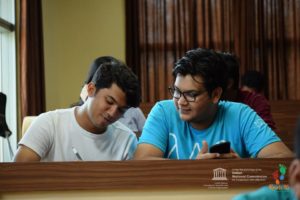 Only eight participants qualified for the second round, which was held on the third day of Revels. Round 2 had two interesting sub rounds which required the participants to exploit their grey matter efficiently. In the first sub round, the part-takers were to enact a weird scenario given to them. The teams had to play the roles of characters from the silver screen, selected specifically for their contrasting traits. This juxtaposition, brilliantly performed by some of the teams, got everyone present roaring with laughter. The second sub-round required the judges to think of a word while the contestants were required to say out a random word. With a minute’s time, the team would have to bring out the best relation between the two words using their maximal creativity. “This round had probably blown my mind. The creativity by every contestant was unimaginable,” confessed Tharasa, the Event Head of Table Number 21.

In the final round, scheduled on Day 4 of Revels, four shortlisted contestants competed in a two-segment competition. In the first segment, the teams were required to identify the dialogues that were played, albeit without the audio. The next segment was a short game of Pictionary. Since the involved words were simple, the contestants aimed at covering the maximum number of words. This really kept them on their toes.

Creativity and innovation were brimming in this event. Table No 21 undoubtedly let everyone use their imaginations in the most colourful way.