A set of activities carried out mainly by the representatives of the defence ministry, as well as other state institutions, aimed at pursuing the foreign policy interests of the state in the field of security and defence policy, and whose actions are based on the use of negotiations and other diplomatic instruments.

Due to inheriting a large military force from the British Raj, India began employing military diplomacy in its external relations almost immediately after Independence. In recent years, the increasing demand and appeal of military diplomacy will require devoting considerably greater resources, manpower, and equipment towards several kinds of activities. It will also require much closer cooperation between the services, between India’s military and civilian leadership, and between the Ministry of Defence and Ministry of External Affairs.

In April 2018, the Government of India gave rise to the Defence Planning Committee (DPC), a new structured institutional mechanism to focus on India’s defence forces and emerging security challenges. One of its core objectives states international defence cooperation and diplomacy.

According to the mandate, the sub-committee is led along the following major guidelines: to evaluate foreign policy needs and create a defence engagement strategy and to identify foreign acquisitions and sales to achieve strategic leverage. Defence diplomacy focuses on establishing healthy bilateral and multilateral relationships for advancement without conflict. In recent times, the visibility and frequency of its various activities have been on a steady increase. 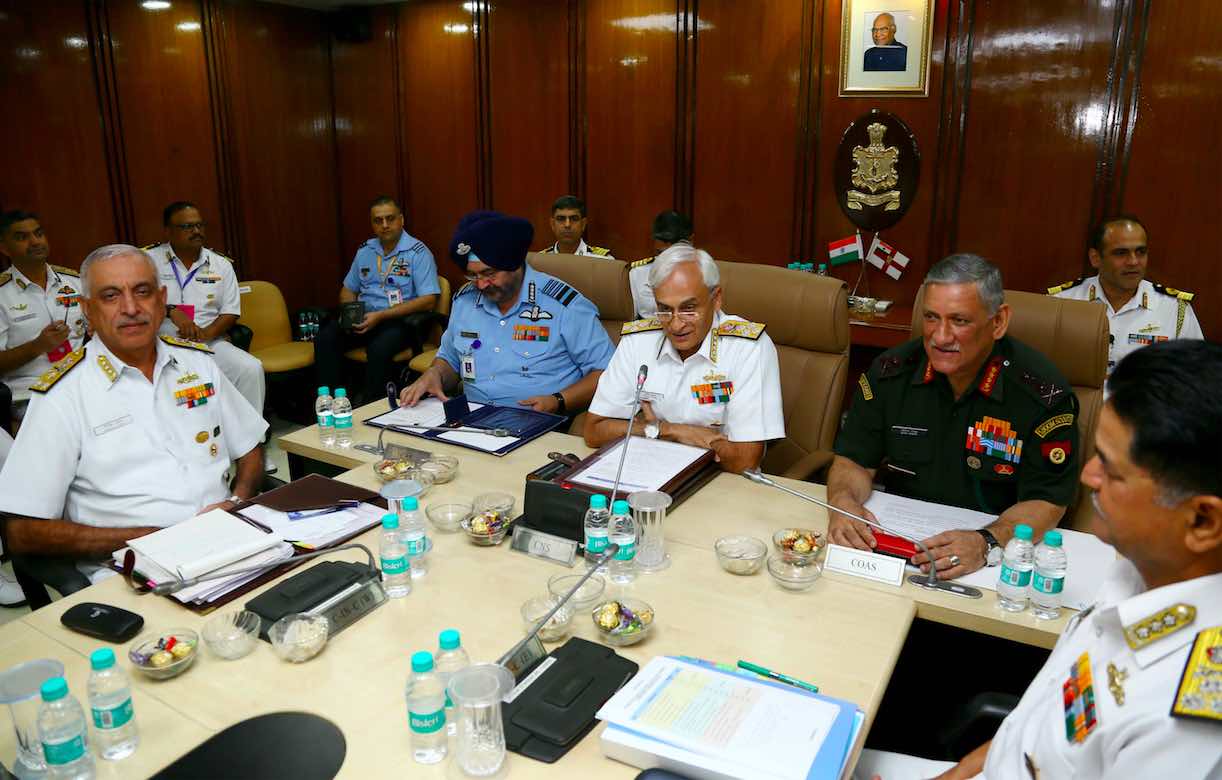 The heads of the three services of Indian Armed Forces at the Commanders’ Conference
(Image Courtesy: Ajai Shukla)

Defence attachés, selected and deployed abroad, emboss a footprint in the host nation and facilitate exchanges. These interactions initiate concrete, strategic relations between countries. Training programs, military hardware exchanges, inviting/deploying personnel for visits, and participating in military games are a few productive activities which materialise this goal. To ensure long-term diplomacy, each step is conducted in the most efficient and friendly manner. For instance, a hardware exchange would also involve facilities like training on maintenance practices and providing spare parts.

India has been holding exercises with the Russian forces for a long time now. The first segment of the bi-annual exercise, INDRA, took place in Lipetsk, Russia in September 2018, and the second started in Jodhpur on December 1, 2018. Since its inception in 2003, the exercise between the two countries has involved ground and naval forces alternatively. It is seen as a prospect for the armed forces of both countries to train in counter-terrorism operations. The countries are now seeking ways of further deepening their ties through joint manufacture and co-production of crucial military hardware and equipment.

Infantry companies from both nations proceed for the exercise (Image Courtesy: Yuri Smityuk)

Similarly, India and China resumed the annual Hand-in-Hand joint exercise in December. Last held in 2016, the training met a stand-off on account of illegal road-building constructions by the Chinese troops in the Doklam plateau region in the Himalayas, a disputed region between Bhutan and China. The 14-day schedule gathered over a hundred personnel from both sides, focusing on cementing the relation after a sour turn in the 73-day stand-off. “The exercise will involve tactical level operations in an International Counter Insurgency/Counter Terrorist environment under UN mandate,” Lt. Col. Mohit Vaishnava of the Indian Army noted in a statement.

India’s military-political relations and arms trade with the US have been on a rapid rise in recent years. There have been a series of bilateral drills, namely the Ex Cope India. Early in December, the Indian Air Force, along with the US, conducted a 12-day military exercise in the Kalaikunda and Panagarh air bases in West Bengal, with an aim to augment operational coordination. The two countries also signed ‘Communications Compatibility and Security Agreement’, known as COMCASA which enables them to share sensitive military information faster and more securely. It marks India as one of the few trusted allies of the US.

A trilateral naval exercise involving the United States, Japan, and India known as Exercise Malabar is another notable drill which includes combat operations from aircraft carriers through Maritime Interdiction Operations.

India is on a constant task to maintain military diplomacy. In the sub-continent, personnel from Nepal, Maldives, and Bangladesh have been enrolled for various cadet training and technical courses in colleges like AFMC Pune, CME Pune, IMA Dehradun, and Staff College Wellington, among others. A large number of alumni from these institutions have risen to high posts in the armed forces. The main driving force governing the foreign policy and military diplomacy of a nation is its requirements. India plays an especially strategic role in international relations and affairs, owing to its various military programs. The nation’s constant military efforts have earned strategic spaces, healthy relationships, and peaceful security control.

About the author Devyani Mehta

A sophomore at Manipal Institute of Technology, currently exploring the field of civil engineering. The only thing she loves as much as reading is putting her thoughts into words. That's not giving you a lot of detail, is it? So read more from her here.